Sockets allow communication between two different processes on the same or different machines. To be more precise, it's a way to talk to other computers using standard Unix file descriptors. In Unix, every I/O action is done by writing or reading a file descriptor. A file descriptor is just an integer associated with an open file and it can be a network connection, a text file, a terminal, or something else.
To a programmer, a socket looks and behaves much like a low-level file descriptor. This is because commands such as read() and write() work with sockets in the same way they do with files and pipes.

Where is Socket Used?
A Unix Socket is used in a client-server application framework. A server is a process that performs some functions on request from a client. Most of the application-level protocols like FTP, SMTP, and POP3 make use of sockets to establish connection between client and server and then for exchanging data.
Syntax:

int socket(int domain, int type, int protocol)
Here., Domain refers to: Socket Family
Ex:AF_UNIX,AF_INET ,AF_NETLINK etc.
Protocol refers to: The type of Protocol we want to use
Ex:TCP,UDP,ICMP etc.
Type refers to: Socket Service Type
Socket Service Types:
The following socket types are defined,The first two are most commonly used and the last two are rarely used.
Processes are presumed to communicate only between sockets of the same type but there is no restriction that prevents communication between sockets of different types.

TCP/IP protocols map to a four-layer conceptual model known as the DARPA model , named after the U.S. government agency that initially developed TCP/IP. The four layers of the DARPA model are: Application, Transport, Internet, and Network Interface. Each layer in the DARPA model corresponds to one or more layers of the seven-layer Open Systems Interconnection (OSI) model. 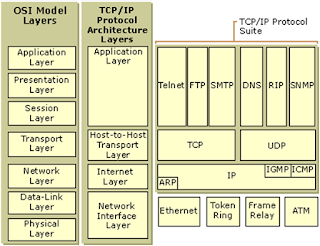 Figure 1.1 TCP/IP Protocol Architecture
Network Interface Layer
The Network Interface layer (also called the Network Access layer) is responsible for placing TCP/IP packets on the network medium and receiving TCP/IP packets off the network medium. TCP/IP was designed to be independent of the network access method, frame format, and medium. In this way, TCP/IP can be used to connect differing network types. These include LAN technologies such as Ethernet and Token Ring and WAN technologies such as X.25 and Frame Relay. Independence from any specific network technology gives TCP/IP the ability to be adapted to new technologies such as Asynchronous Transfer Mode (ATM).
The Network Interface layer encompasses the Data Link and Physical layers of the OSI model. Note that the Internet layer does not take advantage of sequencing and acknowledgment services that might be present in the Data-Link layer. An unreliable Network Interface layer is assumed, and reliable communications through session establishment and the sequencing and acknowledgment of packets is the responsibility of the Transport layer.

“Struct Hack” technique is used to create variable length member in a structure
Example:
struct employee
{
int emp_id;
int  name_len;
char name[1];
};
In gcc, when we create an array of length 1, it is considered as array of incomplete type.This technique is known as “Stuct Hack”. When we create array of variable length inside structure, it must be (and only) last member of structure.
Let us see below memory allocation.
struct employee *e = malloc(sizeof(*e) + sizeof(char) * 128);
is equivalent to
struct employee
{
int emp_id;
int  name_len;
char name[128]; /* character array of size 128 */
};

When we allocate memory as given above, compiler will allocate memory to store “emp_id” and “name_len” plus contiguous memory to store “name”. When we use this technique, gcc guaranties that, “name” will get contiguous memory.
Now we can use “name” same as pointer. e.g.
e->emp_id       = 100;
e->name_len     = strlen("Geeks For Geeks");
strncpy(e->name, "Geeks For Geeks", e->name_len);
Why not use a pointer?

struct Foo
{
// ..
size_t size;
// data = (int*)malloc(sizeof(int) * 10);
int *data;
};
The advantage of using an array is that you don’t have to allocate the memory elsewhere and make the pointer point to that. Thus there is no extra memory management. Furthermore, accesses to the memory will hit the memory cache (much) more likely because dynamically allocated block is contiguous.
Advantage of contiguous memory: